We Remember: Honouring the service of Canada's shipbuilders

In honour of Veterans Week in Canada, we are pausing to recognize the contribution and service of employees at Irving Shipbuilding. We spoke to Canadian Armed Forces veterans from across the business about the reasons why they served.

Alphonse Benteau is a Mechanical Supervisor in the ship repair department at Halifax Shipyard. Having grown up next to the ocean at a lighthouse in Newfoundland, Alphonse has always wanted to sail the globe. The Navy afforded him the opportunity and as a result, Alphonse spent 25 years from 1986 to 2010 in service, seeing many places that he had only read about as a child.

Alphonse was deployed during the Gulf War and has served on several other missions during his career – both overseas at home in Canada. His work onboard HMCS Preserver, HMCS Protecteur, HMCS Terra Nova, HMCS Fredericton and HMCS St. John’s took him on multiple tours. Alphonse notes supporting humanitarian missions, including providing relief after hurricane Andrew, also serving in shore units FMF Cape Breton and at the Canadian Forces Leadership and Recruit School. Alphonse retired at the rank of Petty Officer 2nd Class.

“I served because I wanted to make a difference and belong to something special,” he says. “I chose the Navy because I had a calling to the sea.”

Stephane is a Control Systems Integration Specialist in the CSC Team.

Originally from Sudbury, Ontario, Stephane joined the JDI IT team in 2011 and later began his role with the CSC team in August of 2020. A specialist in defence IT systems, he began military service in the Canadian Armed Forces in 1985, when at the age of 17 he joined the 1st Hussars Primary Reserve Armoured Reconnaissance Regiment unit in Sarnia, Ontario.

Stephane transferred to the Royal Canadian Navy in 1991 and served for an additional 20 years as a Tactical Technician based out of Esquimalt, BC and Halifax, NS. He retired in 2011 in the rank of Master Seaman.

When asked why he gave his service Stephane said, “I served for my family.”

Chaunc was born and raised in Timberlea, Nova Scotia. He joined the Navy in 2007 at the age of 18 and worked to become a Journeyman Electrical Technician until he was retired from service, as a Leading Seaman in 2014 to raise his first son.

“I served in the Navy because I felt a sense of duty and need for adventure, I grew up in a family of service members with my dad and two uncles also in the Navy.”

That same year, Chaunc joined the ISI team as an Electrical Journeyman in the Local 1 Union. He moved into Electrical Planning for the FELEX project where he soaked up the knowledge of his mentors before joining the AOPS Production Engineering Department. Learning about the manufacturing side of Shipbuilding piqued Chaunc’s interest, eventually leading him to the CSC project as a Manufacturing specialist.

“I am proud of my service and carry the skills and experience with me to this day in my career at Irving Shipbuilding.”

Originally from North Head, Grand Manan New Brunswick, Jason joined the Royal Canadian Navy in 1983 as a Ship’s Logistics Officer and later became qualified as an Ammunition Technical Officer through training with the British Army.

Among many experiences he had during service, three stand out to Jason: Coordinating the strategic logistics support (Domestic J4) to the security forces for the Vancouver 2010 Olympic Games; acting as Task Force Commander for Operation Saturn in support of the United Nations African Mission In Darfur (UNAMID) and acting as Commanding Officer Canadian Forces Ammunition Depot at Rocky Point, Victoria, BC.

Over the course of nearly 40 years, Jason was posted to many locations in Canada and abroad, including St Jean-sur-Richelieu, PQ; Victoria, BC; Halifax, NS; Moncton, NB; United Kingdom; Dundurn, SK; Ottawa, ON and El Fasher, Darfur, Sudan. In March 2017, he retired in the rank of Lieutenant Commander and was thereafter appointed to Commander for his deployment to Darfur.

At the foundation of his service Cheney believes, “There is no greater love than to lay down one’s life for another.”

Anthony “Tony” Kelly is a Magazine and Ammunition Specialist at Irving Shipbuilding for the CSC Program. Originally from Jamaica, the Kelly family immigrated to Canada in 1976 after living in England for 11 years. Kelly considers Hampton, New Brunswick his Canadian hometown, where his parents still reside today.

Tony recalls being encouraged by his parents to join the Canadian Armed Forces, a plan to keep him on the straight and narrow as a young man, “This would end up being one of— if not—the best things I have done in my life,” says Tony.

In 1981 He joined the Royal Canadian Navy as a Weaponsperson Underwater, a military occupation that would subsequently become Naval Weapons Technician (NWT) in 1983.

Tony speaks of a meaningful career with the RCN, highlighting among many noteworthy experiences his first trip as a young sailor – the SAR response to the sinking of the Ocean Ranger onboard HMCS Assiniboine, 1982; Escorting Princess Diana and Prince Charles (onboard HMS Britanna) around the Maritimes while on HMCS Assiniboine in 1983; Serving onboard HMCS Terra Nova for the Gulf War of 1990; being part of the First and Commissioning Crew of HMCS Halifax, eventually serving onboard this ship in the former Yugoslavia conflict in 1994; and directing the surface dive team during the Swiss Air recovery effort of 1998.

Tony retired from the RCN as a Fleet Combat Systems Engineering Chief, at the rank of Chief Petty Officer 2nd Class, in January 2020 after giving nearly 38 years of service. In short, Tony says this of his inspiring journey, “I began to serve because I was told to, I continued to serve because I wanted to!”

Paul served in the Canadian Armed Forces from 1985 to 2010, as did his father in who served 25 years in the military. In addition to postings from coast to coast across Canada, he was deployed overseas in Afghanistan, Lebanon, Bosnia, United Arab Emirates, Sierra Leone, and Democratic Republic of Congo. After his many years of service Paul retired as an NCM Sergeant, as an officer Captain.

In a reflection on his reason for serving, Paul looks to the words of renowned American author, Mark Twain, "In the beginning of a change, the patriot is a scarce man, and brave, and hated and scorned. When his cause succeeds, the timid join him, for then it costs nothing to be a patriot."

Dustin Francis is a Communication Systems Engineer from Burnt Islands, Newfoundland working on the Canadian Surface Combatant contract (CSC). He joined Irving Shipbuilding in September 2020 after an enriching career in the Canadian armed forces.

After graduating from high school in 2004, and starting his post-secondary education, Dustin decided to enroll at the Canadian Forces Leadership and Recruit School in Saint-Jean-sur-Richelieu, QC. He had merely planned to spend 5 years in uniform and eventually return to university to complete his degree. Little did he know the experience would exceed his expectations and that he would eventually be offered many great career opportunities, including a 4-year post in Germany.

Over the course of his service, Dustin and his spouse travelled to over 25 countries across multiple continents – including North America, Europe, Africa and Asia. He highlights two deployments in his career: Operation Unified Protector (2011) where he was awarded the Nato Non-Article 5 Medal and Operation Afghan Assist (2011-2012) where he was awarded the General Campaign Star for South-West Asia.

In 2015, Dustin made the difficult decision to leave the Canadian Armed forces to pursue a degree in Engineering from Memorial University of Newfoundland, in his home province. Now, Dustin feels grateful to be closer to home, in Halifax, working in engineering on a defence related project – a field that is both his passion and expertise.

Joseph Gaudet joined Irving Shipbuilding in 2010 and is now in his current role as a Quality Control Inspector in Ship Repair for Hull and Structural Systems. Having served for 35 years in the Canadian Navy as a Hull Technician., Joe spent the majority of his time at sea on the east coast of North America on HMCS Assiniboine, HMCS Fraser, HMCS Preserver, Protector, Provider and Gatineau. Land bases were CFB Cornwallis, CFB Esquimalt and CFB Borden in the NBCD School and NAVRES Recruit School.

Growing up in Pictou, Nova Scotia, Joe was inspired by family members who served in the Canadian Armed forces before him. “Firstly, I joined the Navy to serve my country and follow in my Father’s footsteps,” Joe explains. “I also considered this a great career.”

In 2010 Joe retired from his post in the rank of Petty Officer 1st Class, joining the team at Irving Shipbuilding the same year.

Glenn is a Senior Manager with the Engineering Team at Bluenose who has had the privilege of serving in the Royal Canadian Navy as a Naval Warfare Officer for 20 years.

“My service was my contribution to the defence of our great nation and our allies,” said Glenn.

A native of Kitchener Ontario, Glenn’s Naval service brought him to Canada’s East Coast, where he participated in multiple milestones, including commissioning crews on three of the Halifax Class frigates. He has also enjoyed the great experience of three years on exchange with the Royal Canadian Navy.

In 2002 Glenn retired from the navy at the rank of Lieutenant Commander, joining the team at Irving Shipbuilding in 2020.

Stacey Wiper is the Director of Health, Safety and Environment at Irving Shipbuilding.

Stacey joined the Royal Canadian Navy in 1983 as a Naval radio Operator. After several years of listening to Morse Code, he was offered a scholarship where he completed his degree at the Royal Military College of Canada (RMC), graduating in 1993. Shortly after, he was and Commissioned as a Naval Officer.

“Growing up in Halifax, where the Military is such a fixture, joining the Navy almost seemed like a natural step where – almost immediately upon joining –I realized that this was going to be a pretty exciting career with a tremendous amount of opportunity,” said Stacey.

Having spent over 32 years at sea onboard numerous RCN ships, Stacey participated In numerous national and international sea-going deployments and has lived in various parts of Canada and the world. Stacey spent time in service in British Columbia; Ontario; Nova Scotia; Quebec; United States (Colorado); Kosovo; Haiti; South Korea; Bermuda and Jamaica. Stacey retired in 2015 in the rank of Commander.

“Whether it was learning new skills, sailing, living all over the world to being part of several significant and challenging humanitarian operations,” Stacey explains. “I would do it all again if I had the chance!” 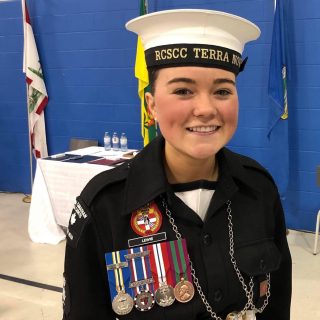 Supporting veterans on their path to entrepreneurship 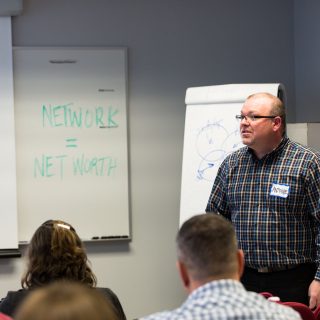