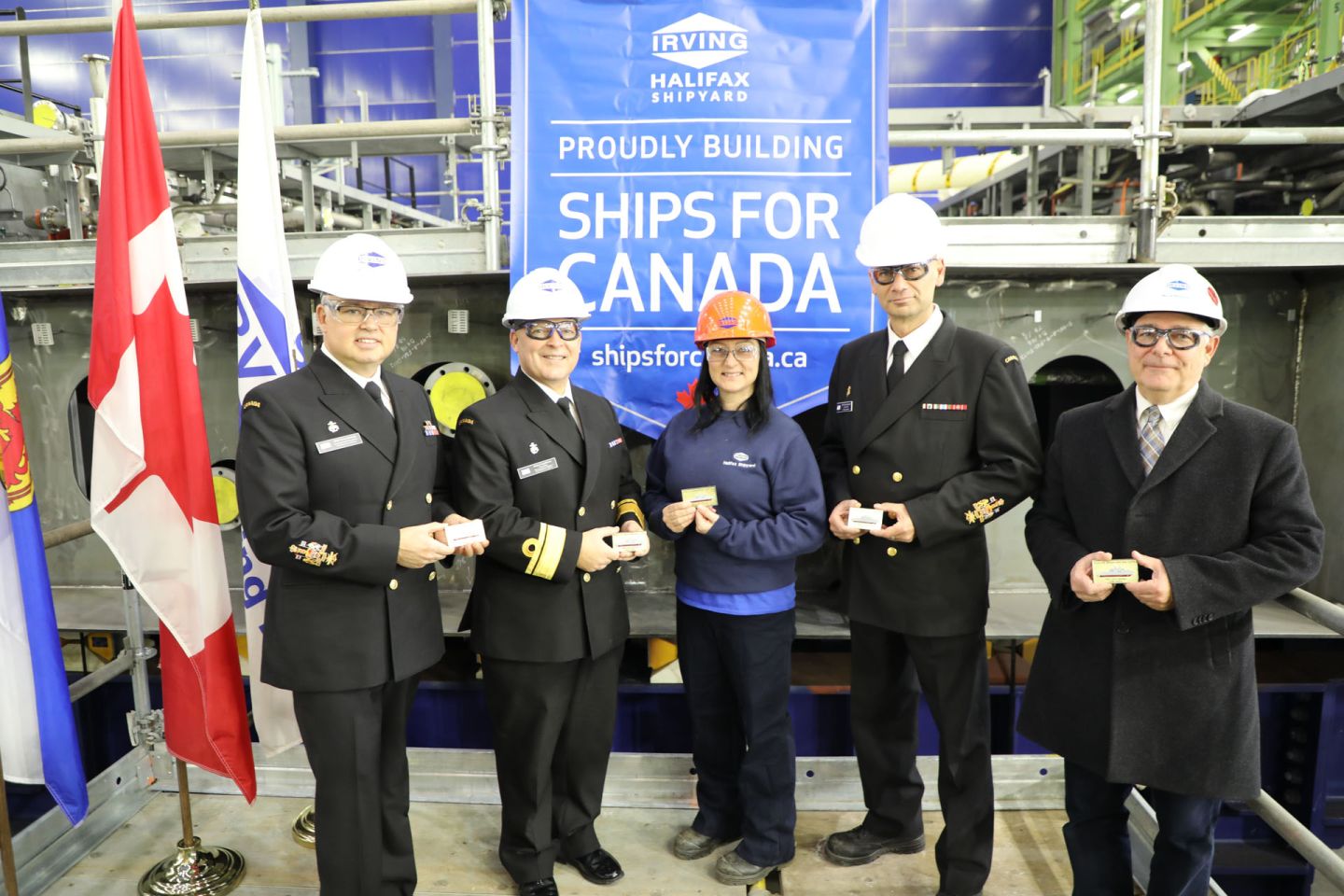 Today at Halifax Shipyard, welder Vicki Berg laid a coin on the keel of the future Her Majesty’s Canadian Ship (HMCS) Max Bernays signifying the start of full production of the Royal Canadian Navy’s third Arctic and Offshore Patrol Ship.

A keel-laying ceremony is one of the most significant dates in a ship’s life. In shipbuilding tradition, a coin is laid on the keel of a ship during construction and remains embedded within the ship’s structure for its entire life to invite good luck for all who sail in it.

The Arctic and Offshore Patrol Ships are built in modules and do not have a traditional keel that runs the length of the ship. Instead, Ms. Berg placed the coin on the first keel unit of the centre section of the ship while declaring the keel well and truly laid.

The coin placed in the keel of the future HMCS Max Bernays is the fifth in the Canadian Mint Second World War Battlefield series. It captures the intensity of the Battle of the Atlantic, the time at which Chief Petty Officer Bernays performed the actions that earned him honours and a celebrated place amongst Canadian Naval heroes. The coin selected conveys a real sense of the dangers faced by those who sailed the seas between 1939 and 1945 and is a tribute to all the Canadians who fought in the longest campaign of the Second World War.

Once complete, and turned over to the Royal Canadian Navy, the future HMCS Max Bernays will be the first Arctic and Offshore Patrol Ship to join Maritimes Forces Pacific.

The Harry DeWolf-class Arctic and Offshore Patrol Ships under construction at the Halifax Shipyard are the first class of Royal Canadian Navy ships named after Canadian war heroes.

Chief Petty Officer Max Leopold Bernays is a Canadian naval hero who served as the Coxswain of His Majesty’s Canadian Ship Assiniboine during the Battle of the Atlantic.

On 6 August 1942, in an intense surface gun action against the German submarine U-210, HMCS Assiniboine maneuvered in and out of fog attempting to ram and sink the enemy submarine. Both vessels were firing high explosive shells at very close range, causing a fire which engulfed the bridge and wheelhouse of Assiniboine.

Surrounded by smoke and flames, while steering the ship, CPO Bernays ordered the two junior sailors to get clear, leaving him alone at the helm and trapped by the blaze. Besieged by flames, he executed all the helm orders as Assiniboine maneuvered for position against the U-boat, and did the work of the two telegraphmen, dispatching over 130 telegraph orders to the engine room. Several bullets and shells penetrated the wheelhouse as the enemy concentrated their machine-gun and cannon fire on the bridge. Eventually Assiniboine rammed and sank U-210 in what was considered to be an extremely hard-fought action, during which the Canadians suffered one fatality and 13 wounded.

He was awarded the Conspicuous Gallantry Medal for his valour and dauntless devotion to duty during the action. Post-war he stayed in the RCN and retired as a Chief Petty Officer on February 20, 1960. He died in North Vancouver, BC on 30 March 1974.

The 103 metre Arctic and Offshore Patrol Ships will patrol Canada’s oceans, including the Arctic, and are perfectly suited for missions abroad to support international partners, humanitarian aid, disaster relief, search and rescue, and drug interdiction.

The lead ship in the Arctic and Offshore Patrol Ship program, the future HMCS Harry DeWolf, is now pier side at Halifax Shipyard and is scheduled to be turned over to the Royal Canadian Navy in summer 2019.

In November, the Government of Canada announced a sixth Arctic and Offshore Patrol Ship will be built by Halifax Shipyard’s 1,900 shipbuilders.

The Artic and Offshore Patrol Ship Program is part of Canada’s National Shipbuilding Strategy. The Strategy was created to replace the current surface fleets of the Royal Canadian Navy and the Canadian Coast Guard.

As a result of the National Shipbuilding Strategy, Irving Shipbuilding has become one of Atlantic Canada’s largest regional employers, with thousands of Canadians now working in skilled, well-paying jobs. The Halifax Shipyard, long at the centre of Canadian shipbuilding, is now revitalized and home to the most modern, innovative shipbuilding facilities, equipment, and processes in North America. 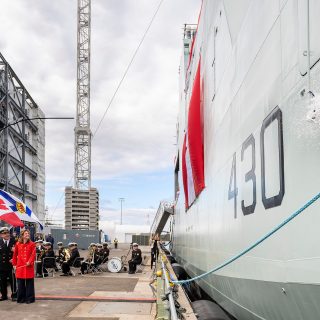 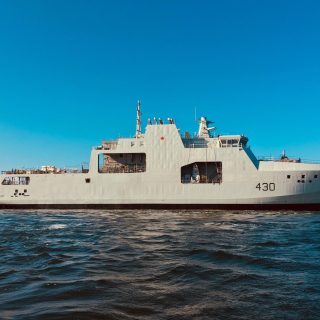