Irving Shipbuilding Workers Are on a Mission

When you first walk through the gates of the Halifax Shipyard, you’re met with a feeling of significance and excitement. The energy starts with the yard’s massive new $350 million dollar facility that stretches close to four football fields in length.

The magnitude of the building represents the scale and importance of the work happening inside - something ISI’s culture has openly embraced.

At every level of the organization, there is a clear sense of teamwork, pride and purpose.

"I have a young daughter, and what drives me is coming to work, being on time, doing a good job, and knowing one day she's going to look out into the harbour and see a ship that I helped make."

Whether employees have been with ISI for their entire career, or are still in their first year of employment, the construction of Canada’s newest AOPS vessel is an inspiring experience for everyone.

More than 1,000 employees are currently working to build the first AOPS vessel. In 2015, ISI has had to make substantial additions to its workforce.

In 2015 alone, ISI recalled 325 workers and hired more than 250 skilled tradespeople and staff – a number that will grow steadily over the next decade.

Workers from across the country have come to ISI in Halifax to be a part of history. Together, they will build the future fleet of the Royal Canadian Navy.

These employees have signed on for more than a job; they’re here for a steady and secure career working with the best and newest technology on projects that will span more than 30 years.

David Bartlett, an ironworker originally from Newfoundland says he was excited when the federal contract was announced in 2011 and today is happy to play an important role on the AOPS project.

"I am one of few that are able to work in any area of the new facility, which gives me a variety of work to do, so no two days are the same," says Bartlett.

An eight year veteran at ISI, David has witnessed firsthand the advances in technology in the past five years and the changes to level of training required to work in the new facility at the Halifax Shipyard.

Besides working on the historic project, David says his co-workers make coming to work fun and enjoyable. "At ISI, you work with a great bunch of people. You end up spending more time with them than your family."

Like many ISI employees, David finishes his day by returning to his own family and says they play a big role in his professional success.

The New Face of Shipbuilding 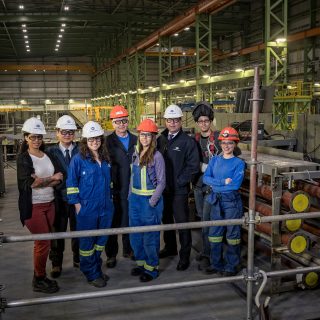