In 2013, while in the midst of expanding operations along Halifax Harbour and constructing the most modern shipbuilding facility in North America, Irving Shipbuilding was proud to partner with Clean Foundation (formerly Clean Nova Scotia) on the inaugural installation of artificial reef structures, known as Reef Balls, as part of Clean Foundation’s Atlantic Reef Ball Program. The Atlantic Reef Ball Program builds, installs, and monitors artificial reefs in Atlantic Canada in an effort to improve and/or restore coastal marine habitat. The artificial reef structures are designed to establish quality habitats that will draw a variety of marine species into coastal zones and contribute to the growth of coastal ecosystems. Irving Shipbuilding supported Clean as a way to offset any impact that expansion of the Halifax Shipyard would have on marine habitat in the Halifax Harbour.

Through the partnership, 100 Reef Balls were installed in two locations in Halifax Harbour – one just off Point Pleasant Park and one off the coast of McNab’s Island – resulting in the creation of 16,700 square meters of marine habitat.

As part of the partnership, Clean has maintained and monitored the habitats since their installation and has seen great success with the locations to date.  Regular monitoring has shown a variety of marine life in and around the structures. In addition to providing shelter and protection for marine species, the artificial reefs have also supported the growth of algae which is a foundational piece in the marine ecosystem. In some areas, the original structures are no longer visible under the growth of algae and seaweed, demonstrating the successful intent of the installations.

In the years since the initial launch with Irving Shipbuilding, Clean has built on the success of the program and engaged other industry partners in additional installations. Since 2013, they have more than doubled the number of Reef Balls installed in Halifax Harbour and added a third site, including one site that will have a live web feed. Currently the program has 264 Reef Balls installed, creating over 47,000 square meters of artificial habitat in Halifax Harbour.

Irving Shipbuilding has deep roots in Halifax Harbour and for decades we have been dedicated to a sustainable and vibrant shipbuilding and marine industry in Canada. We are proud to see these Reef Balls develop into successful habitats for marine life here at home. 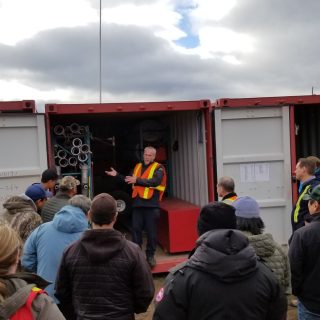