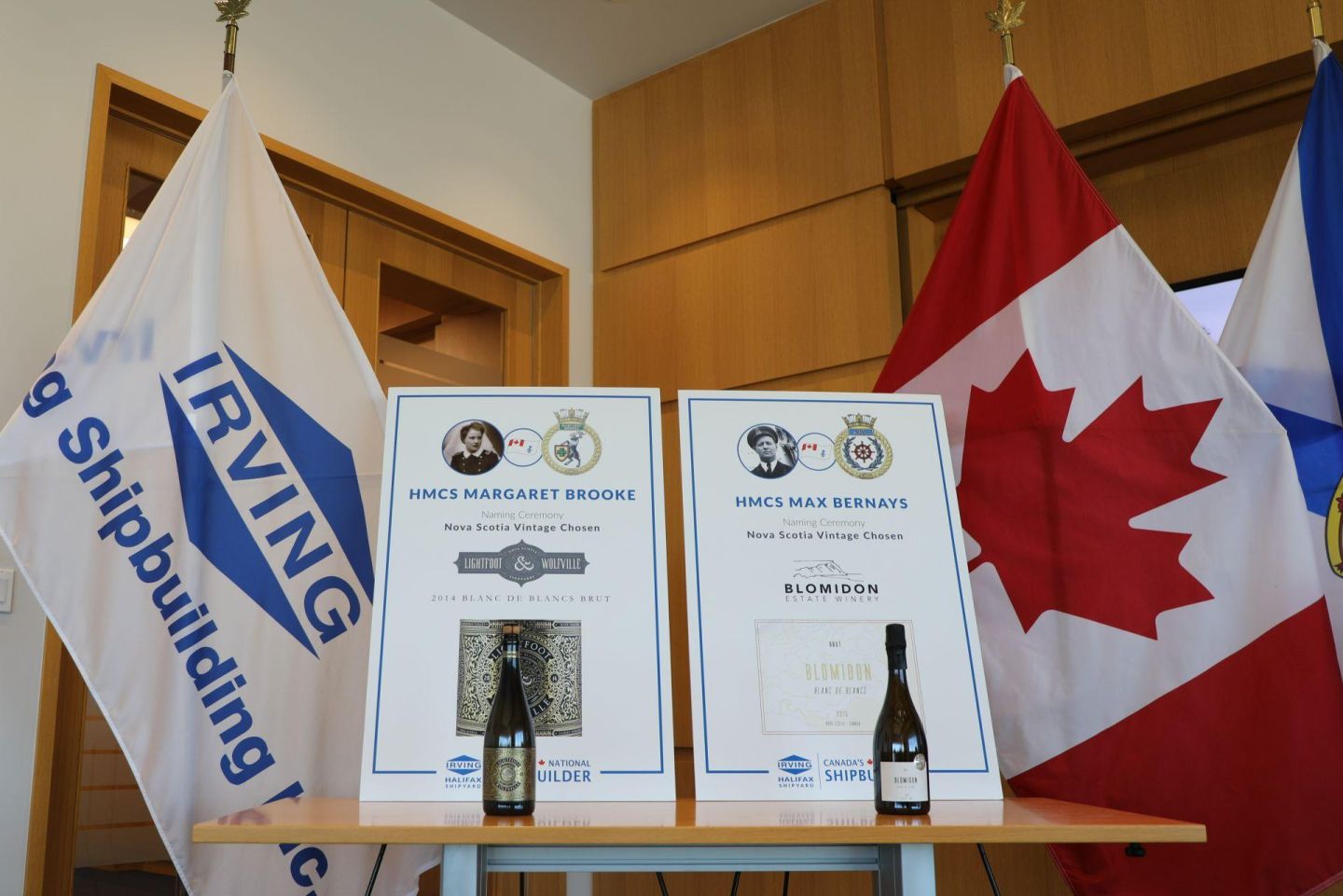 Today, the vintages of two Nova Scotia wineries were selected to officially name the two Arctic and Offshore Patrol Ships at a ceremony to be held this coming Sunday, May 29th, 2022.

HMCS Margaret Brooke and HMCS Max Bernays are ships #2 and #3 of the Arctic Offshore and Patrol Ship program (AOPS). These ships are named to honour prominent Royal Canadian Navy heroes who served their country with the highest distinction.

The naming of a ship is a steeped in history and naval tradition. Dating back centuries, this ritual is believed to bring good luck and safe travel to the vessel and crew.

“The Arctic and Offshore Patrol Ships are built in Nova Scotia by the skilled and dedicated shipbuilders at the Halifax Shipyard, so it is most fitting to use Nova Scotia wines to name the vessels,” explained Kevin Mooney, President of Irving Shipbuilding.

“We are delighted to see Nova Scotia wineries as part of this century’s old tradition. As a Nova Scotia farm winery located in Wolfville employing 70 people and entering our 11th vintage, we are honoured to have our 2014 Blanc de Blancs Brut - our most awarded wine to date - being used to name HMCS Margaret Brooke after an extraordinary Canadian war hero. We wish this ship and all who will bravely serve aboard her safe sailings and returns to home port,” said the Lightfoot Family.

“Nova Scotia’s wine industry contributes to our province’s economy and our collective sense of place. Wines from Nova Scotia are recognized nationally and internationally for their cool climate excellence. In vineyards around the province, buds are breaking, and wine growers are busy preparing their vineyards for the agriculture season ahead. Seafaring and farming are both integral parts of our provincial heritage, so on behalf of Nova Scotians, I’m proud to wish smooth sailing for these new ships and the growing season ahead,” said Minister of Agriculture Greg Morrow, Province of Nova Scotia.

“The Annapolis Valley is the heart of Nova Scotia's emerging wine sector; I am so pleased that two exquisite wines from Kings-Hants have been selected to be part of this ceremonial and historic event as we celebrate HMCS Margaret Brooke and HCMS Max Bernays. Nova Scotia is proud to be the home of Canada’s shipbuilding,” explained Kody Blois, Member of Parliament for Kings-Hants

“The Nova Scotia wine industry is honoured to participate in the naming of the HMCS Margaret Brooke and the HMCS Max Bernays after two Canadian heroes. Partnering land and sea, Nova Scotia is not only a wine region with the world's highest tides, but our province's wine is grown on an ancient seabed that contributes to a unique viticulture climate and terroir. We are privileged to participate in this ceremony and to all those who serve, we thank you for your sacrifices and we wish for a safe journey home,” commented Haley Brown, Executive Director, Wine Growers Nova Scotia.