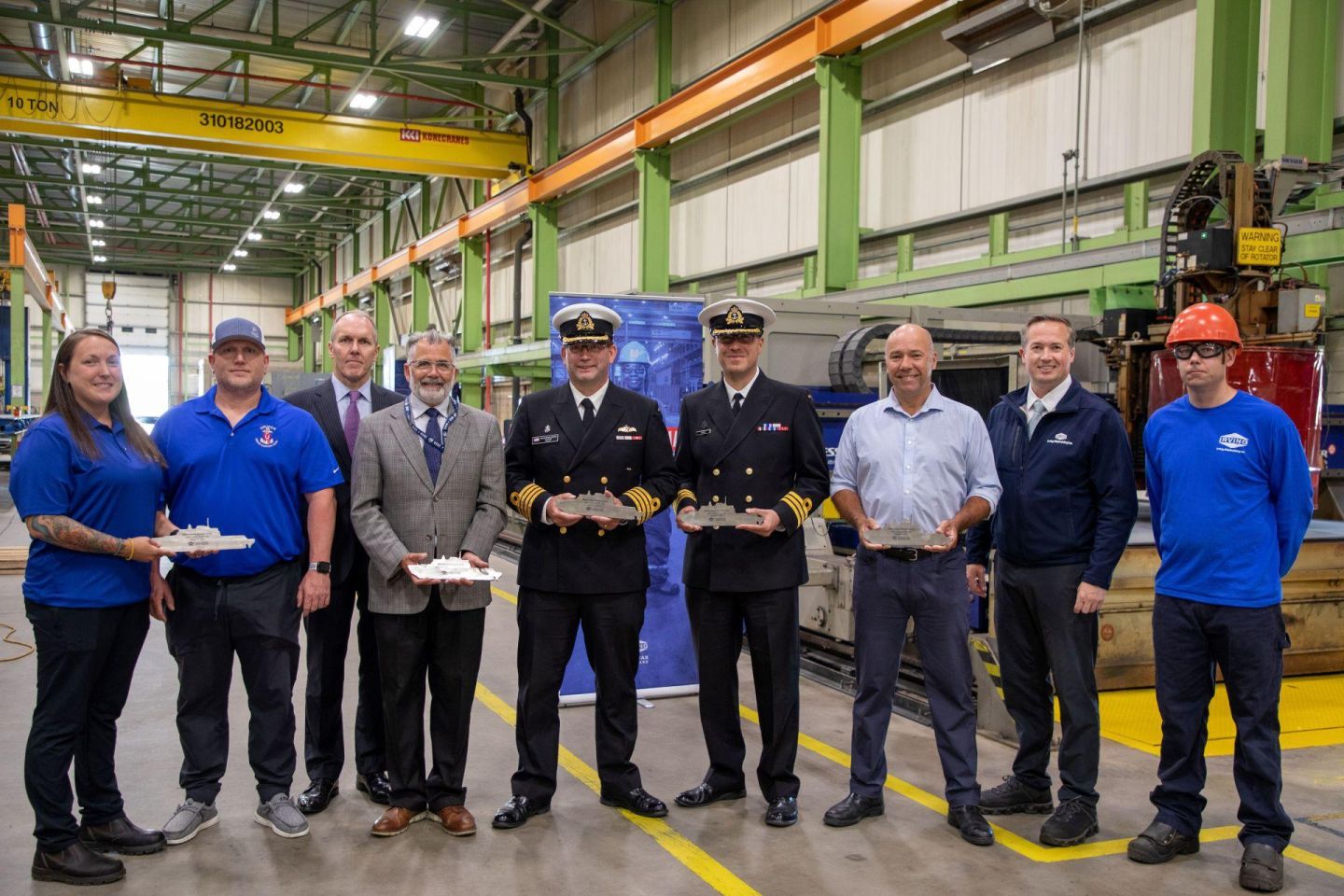 Construction of Canada’s future combat fleet begins at Irving Shipbuilding’s Marine Fabricators facility in Dartmouth, where 32 people are involved in the computerized plasma cutting and delivery of 4,000 tonnes of steel each year in support of the AOPS program. The resulting 70,000 pieces are fabricated in a strategic sequence to meet the production schedule at Irving Shipbuilding’s Halifax Shipyard, the most modern and largest indoor shipbuilding facility in North America.

The steel weighs 3734 kilograms (3.7 tonnes) and will be used in a combination of locations on the ship, including the initial pieces that will begin development of the keel. Upon completion, the future HMCS Robert Hampton Gray will be 103.6 metres in length, have a 19-metre beam, displace 6,615 tonnes and be comprised of 440,000 parts. Each AOPS vessel has over 300kms of cable and more than 36kms of pipe.

To date, two AOPS have been delivered to the Royal Canadian Navy – HMCS Harry DeWolf and HMCS Margaret Brooke. The future HMCS Max Bernays (AOPS 3) is due for delivery next month. The future HMCS William Hall (AOPS 4) recently moved all Mega Blocks to land level and is undergoing final assembly in preparation for launch later this year. The future HMCS Frédérick Rolette (AOPS 5) officially laid the keel in June of this year and construction of the bow, mid-ship and stern Mega Blocks are underway.

Halifax Shipyard will also construct two AOPS variants for the Canadian Coast Guard, followed by 15 Canadian Surface Combatants for the Navy that are due to commence construction in 2024.

Lt Gray joined the Royal Canadian Naval Volunteer Reserve in 1940 and served as a pilot in the Royal Navy Fleet Air Arm. He embarked in His Majesty’s Ship (HMS) Formidable with 1841 Squadron, joining the war in the Pacific as part of Operation Iceberg, the invasion of Okinawa, Japan, in April 1945.

Lt Gray was awarded the Victoria Cross posthumously for courage and determination in carrying out daring air strikes on the Japanese destroyer His Imperial Japanese Majesty’s Ship (HIJMS) Amakusa.

On August 9, 1945, he led two flights of Corsair aircraft to attack naval vessels in Onagawa Bay, Japan. He opened the attack run flying straight into concentrated anti-aircraft fire and was hit almost immediately.

With his aircraft on fire and one bomb lost, he continued the attack and released his remaining bomb on the escort vessel HIJMS Amakusa, causing the ship to capsize and sink. His aircraft then crashed into the sea and his body was never recovered.

Lt Gray was known to his fellow military members as a courageous leader with a brilliant flying spirit, who continued to inspire and motivate his crew after his unfortunate passing.

Lt Gray was the only member of the RCN to be awarded the Canadian naval Victoria Cross from the Second World War.

Over the years, Lt Gray’s courage, service and sacrifice continue to be recognized in many ways. In 1946, the Geographic Board of Canada named Gray’s Peak, a mountain in British Columbia’s Kokanee Glacier Provincial Park, in honour of Lt Gray and his brother John, also killed during the war.

In 1989, a memorial was erected to him at Onagawa Bay, the only memorial dedicated to a foreign service member on Japanese soil.

Andy Fillmore, Member of Parliament for Halifax and Parliamentary Secretary to the Minister of Innovation, Science and Industry.

“The National Shipbuilding Strategy is creating jobs and economic activity across Canada, including locally in Halifax where the number of companies and workers benefitting from this program has increased substantially since 2015. As the sixth Arctic and Offshore Patrol Ship to be added to the Royal Canadian Navy fleet under the Strategy, cutting the first steel for the future HMCS Robert Hampton Gray is an important milestone in our work to equip our Navy with the ships they need to protect Canadian interests.”

“Today marks a momentous event in the life of a ship. We have reached a very significant milestone with the commencement of production on Canada’s sixth and final Arctic and Offshore Patrol Ship, the future HMCS Robert Hampton Gray. Robert “Hammy” Gray was the recipient of the only Canadian naval Victoria Cross in the Second World War. His courage and determination will endure within the steel used to forge the newest and final addition to the Harry DeWolf-class. The Arctic and Offshore Patrol Ships are a critical platform for our Navy, they will ensure that we can patrol, secure and protect Arctic waters for decades to come.”

“Today marks an historic milestone in the Arctic and Offshore Patrol Ships (AOPS) program as we cut steel on the sixth and final ship of the class for the Royal Canadian Navy. I am proud of our 2,100 shipbuilders, who are committed to continuous improvement and providing quality ships to those who bravely serve. Our workforce has grown by 65% since 2012. To date, we have seen over $4.75 billion in spending commitments to over 325 organizations across Canada.

As we begin this last AOPS for the Navy, we are realizing a 50% reduction in the number of production hours it takes to build each ship. Today’s steel cutting is taking place at our Marine Fabricators facility in Dartmouth. It gives me great pleasure to share that our workers at this facility have operated for 7 years running without a lost time safety incident.

We look forward to delivering this sixth AOPS ship to Canada in December 2025.”

Irving Shipbuilding Inc., Canada’s National Shipbuilder, is the most modern shipbuilder and in-service ship support provider in North America. Headquartered in Halifax, Nova Scotia, our skilled team and innovative facilities provide efficient building, fabrication, conversion and servicing of vessels and offshore platforms. Irving Shipbuilding Inc. is the prime contractor and shipbuilder for the Royal Canadian Navy’s next class of Canadian Surface Combatants (CSC) and Arctic and Offshore Patrol Ships (AOPS) as part of the National Shipbuilding Strategy (NSS). We are proud to continue our long history as a trusted partner in Canadian shipbuilding. Irving Shipbuilding Inc. is a member of the J.D. Irving, Limited group of companies, a diverse family-owned company with operations in Canada and the United States. Learn more at www.ShipsforCanada.ca.