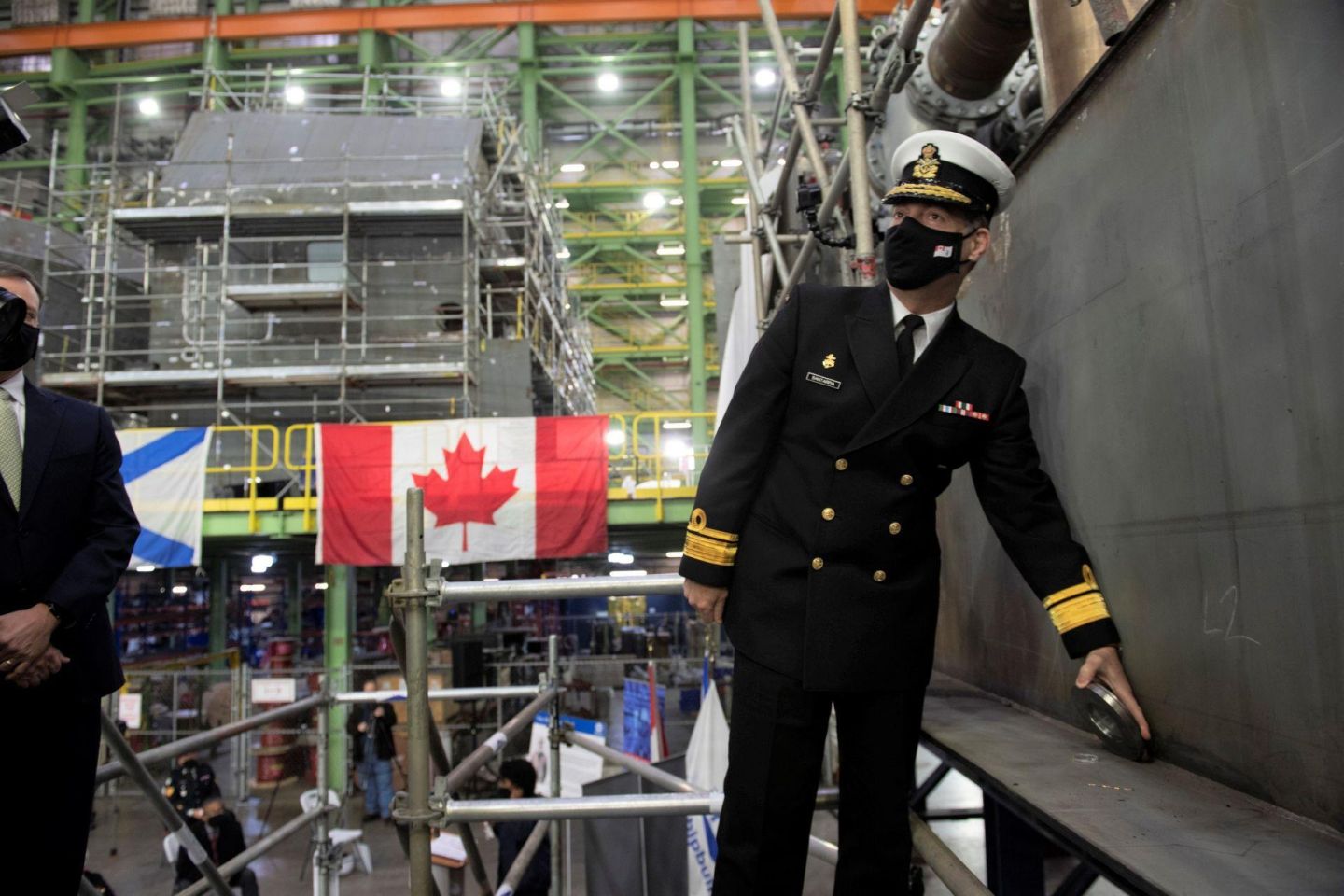 The keel laying ceremony is a centuries old tradition that marks the formal start of a ship’s construction. Today’s ceremony included the tradition of the welding of a coin to the hull of the ship to bring luck to the captain and crew during the life of the ship. The coin, selected by the Royal Canadian Navy and presented by Rear Admiral Brian Santarpia, Commander of Maritime Forces Atlantic (MARLANT) and Joint Task Force Atlantic (JTFA), was welded in place by Macey Rolfe, a graduate of the Women Unlimited Program Shipbuilding Program and by Tyrell Young, a graduate of the 2020 Pathways to Shipbuilding for African Nova Scotians. Irving Shipbuilding President Kevin Mooney officially declared the hull “well and truly laid” at the conclusion of the ceremony on behalf of the 2,100 shipbuilders at Irving Shipbuilding.

Constructed in the most modern and largest indoor shipbuilding facility in North America, the ship is named after Petty Officer William Hall, the first Black person, first Nova Scotian and third Canadian to receive the British Empire’s highest award for bravery, the Victoria Cross. The son of former American slaves, Hall was born in 1827 in Horton, Nova Scotia. As a young man, he worked in shipyards in Hantsport, building wooden ships for the merchant marine. Hall enlisted in the Royal Navy as an able seaman in February 1852 and in 1857 was nominated for the Victoria Cross for his actions at the Relief of Lucknow. After his naval career, Hall returned to Nova Scotia to settle on the family farm near Hantsport.

The future HMCS William Hall will be 103.6 metres in length, have a 19 metre beam, displace 6,615 tonnes and be comprised of 440,000 parts. Canada’s second and third AOPS, the future HMCS Margaret Brooke and the future HMCS Max Bernays, are also under construction at Halifax Shipyard. The Margaret Brooke is in final preparations for upcoming Sea Trials and delivery to the Royal Canadian Navy this spring, while the Max Bernays has been moved to land level in advance of the scheduled launch in November. First steel on AOPS 5, the future HMCS Frédérick Rolette will be cut later this spring. The lead vessel in the class, HMCS Harry DeWolf, was delivered to the Royal Canadian Navy on July 31, 2020.

To date Ships for Canada at the Halifax Shipyard has delivered over $3.6 billion in investments across Canada and is generating over 8300 jobs (direct and indirect). Halifax Shipyard is continuing to hire – over 160 positions since the new year began.

“Our 2,100 shipbuilders are proud to be building this brand-new class of vessel for the Royal Canadian Navy and to showcase their skills as world-class shipbuilders. We also want to recognize the more than 300 businesses partners we have here in Nova Scotia and across Canada that are part of this historic program under the National Shipbuilding Strategy, making a positive economic impact from coast-to-coast-to-coast through well-paying jobs and investment in Canadian companies and innovative technology.”

“Today, as we lay the keel of the future HMCS William Hall, we reflect on the contributions of African Nova Scotians, and all Black Canadians, to shipbuilding, to our navy, and to so many institutions. While there is still much work to do confronting racism and prejudice, when a vessel in our naval fleet, that is built right here at Irving Shipyard in Nova Scotia, bears the name of a Black Canadian, it is our Maritime way of paying long overdue respect. This ship is a state-of-the art vessel that any Canadian would be proud to sail aboard, and we are honoured it will be joining our Navy fleet.”

Andy Fillmore, Member of Parliament for Halifax and Parliamentary Secretary to the Minister of Infrastructure and Communities

“The Arctic and Offshore Patrol Ships will significantly enhance the Canadian Armed Forces capabilities and presence in the Arctic. And they will be critical in military operations in the Atlantic and Pacific oceans. These ships are modern, multifunctional, and mighty. The first AOPS was delivered last year, and the laying of this keel represents a significant step forward in production of the fourth ship. It’s an exciting and busy time here in Halifax. A time of progress, growth, and investment.”

"Our government is also committed to creating inclusivity so all individuals have access to the opportunities that this province has to offer. It is also our shared responsibility to continue acknowledging the historical figures from our diverse communities who have helped shape our society like African Nova Scotian Petty Officer William Hall.”

“It was an inspired choice to honour Petty Officer William Hall as the namesake for this fine vessel and I believe he will be a source of inspiration for our sailors lucky enough to sail in this state-of-the-art vessel. With the addition of this ship, and the others of the Harry DeWolf-class, the Royal Canadian Navy will continue to excel at sea and provide outstanding capabilities in support of Canadian interests both at home and abroad, demonstrating that we are a modern, digitally-enabled, 21st century navy – Ready to Help, Ready to Lead and Ready to Fight.”

“Today, during Black history Month, the keel of the future HMCS William Hall will be laid. There can be no greater recognition for a former sailor than to have a naval vessel bear their name. May all those who are part of the construction and eventually serve on the future HMCS William Hall continue to share his story. Our thanks to the Royal Canadian Navy for this great honour and recognition of the service of William Hall, VC.”