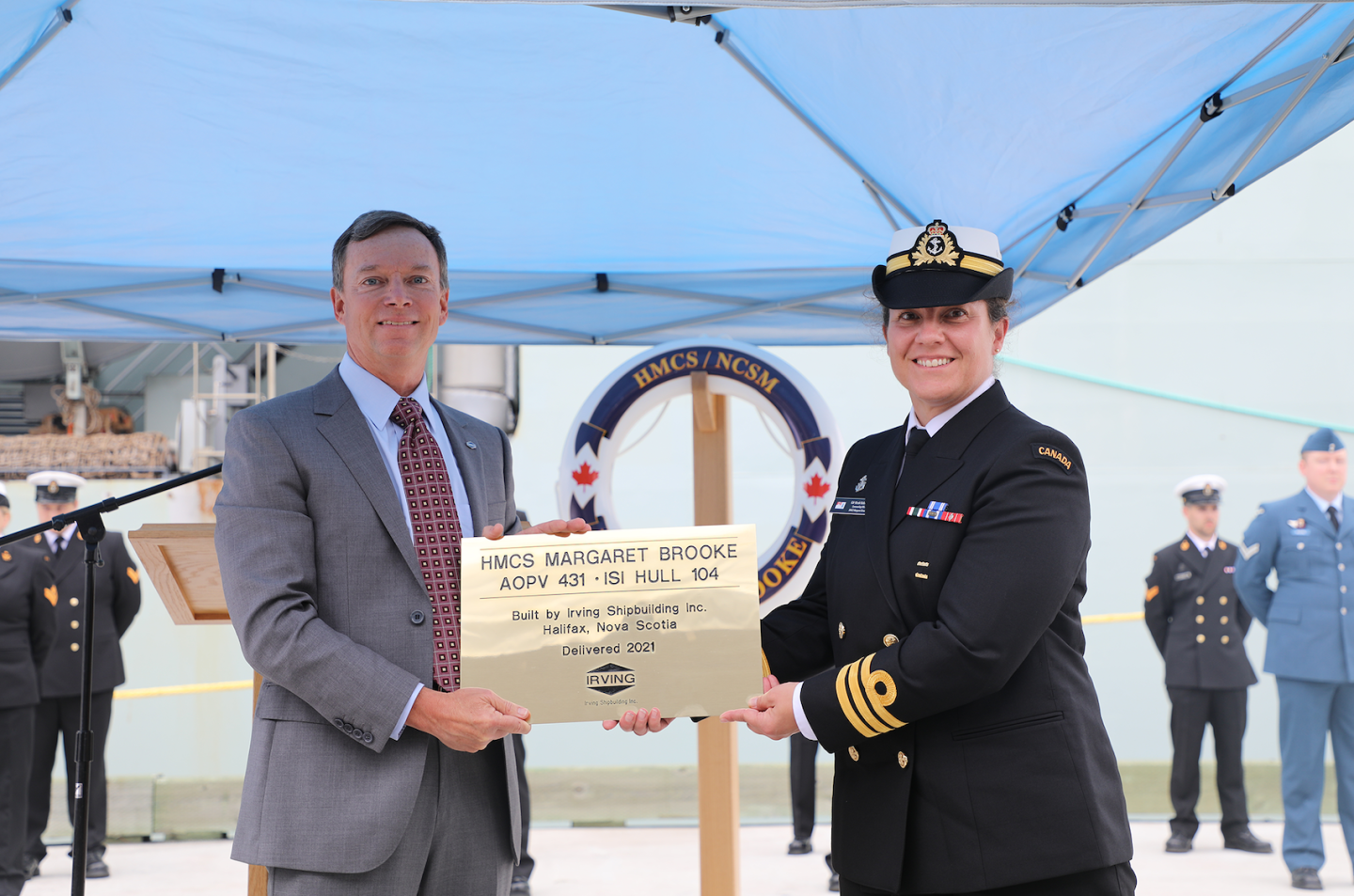 (Halifax, NS) - The future HMCS Margaret Brooke is the first Canadian combat ship to be named for a woman and was delivered today in a ceremony at the Royal Canadian Dockyard in Halifax. Lieutenant Commander Margaret Brooke, MBE, was a Royal Canadian Navy Nursing Sister decorated for gallantry during the Second World War. On her 100th birthday, Margaret Brooke received a phone call to inform her that Canada's second AOPS would be named in her honour, making her the first living person in Canadian history to have that honour bestowed upon them. Margaret Brooke passed away in Victoria, B.C. on 9 January 2016.

Speaking at today’s event, Kevin Mooney, President of Irving Shipbuilding focused on the people and partnerships that make it happen. “What a great day it is to be a shipbuilder in Canada! It takes teamwork between many organizations to successfully build great ships. And the most important organization is our customer – the Department of National Defence, and by extension, the Royal Canadian Navy.”

“You will have heard that the future HMCS Margaret Brooke is the first combat ship in the Royal Canadian Navy’s history to be named after a woman, and I can state without reservation that the future fine ship would not be here today without the hard work and dedication of the women of Irving Shipbuilding,” Mooney explained.

“In Canada, women represent 4% of the skilled trades work force, and today at Irving, women comprise twice that number at about 8%. Women also represent 26% of our non-trades employees. All of them play an important role in delivering ships to Canada. In honor of the contribution by the women at Irving Shipbuilding to this milestone we’re celebrating today, and in memory of Margaret Brooke, I have entrusted our Health & Wellness nurse - Tammy Gray - with signing authority for today’s ceremony, delivering the future HMCS Margaret Brooke to the Navy,” Mooney continued.

Mooney concluded his remarks recognizing Zach Thomas, one of 12 students who graduated from the company’s first Indigenous Pathways to Shipbuilding program in 2018. Zach is part of the Sipekne’katik First Nation in Nova Scotia. Zach’s family were directly affected by events that occurred at the Norway House residential school in Manitoba and have been a large part of the Mi’kmaq Friendship Centre here in Halifax for approximately 28 years. Zach has volunteered to be a mentor for the second Indigenous Pathways group which officially started just a few weeks ago. These future shipbuilders were with at the ceremony with Zach.

“On behalf of the 2,100 women and men of Irving Shipbuilding, thank you for allowing us the privilege of joining you today for this historic occasion. Fair winds & following seas to the future HMCS Margaret Brooke and all who sail in her!” Mooney concluded.

The 6,615 tonne Arctic Offshore and Patrol ship (AOPS) is comprised of 440,000 parts and the second ship to be delivered by Irving Shipbuilding under the National Shipbuilding Strategy. It is part of the DeWolf Class, which is the most modern and the largest class of vessel ever built in Canada in a combat package. These are also the largest Navy vessels built in Canada in more than 50 years.

Canada’s Arctic & Offshore Patrol Ships are known as the Harry DeWolf-class, with HMCS Harry DeWolf being the lead ship, marking the first time in its 111-year history the Royal Canadian Navy is naming ships in a class in honour of prominent Canadian military members. The future HMCS Margaret Brooke is Hull Number 104 for Halifax Shipyard and Pennant Number 431 for the Royal Canadian Navy. The vessel will officially be named this fall.