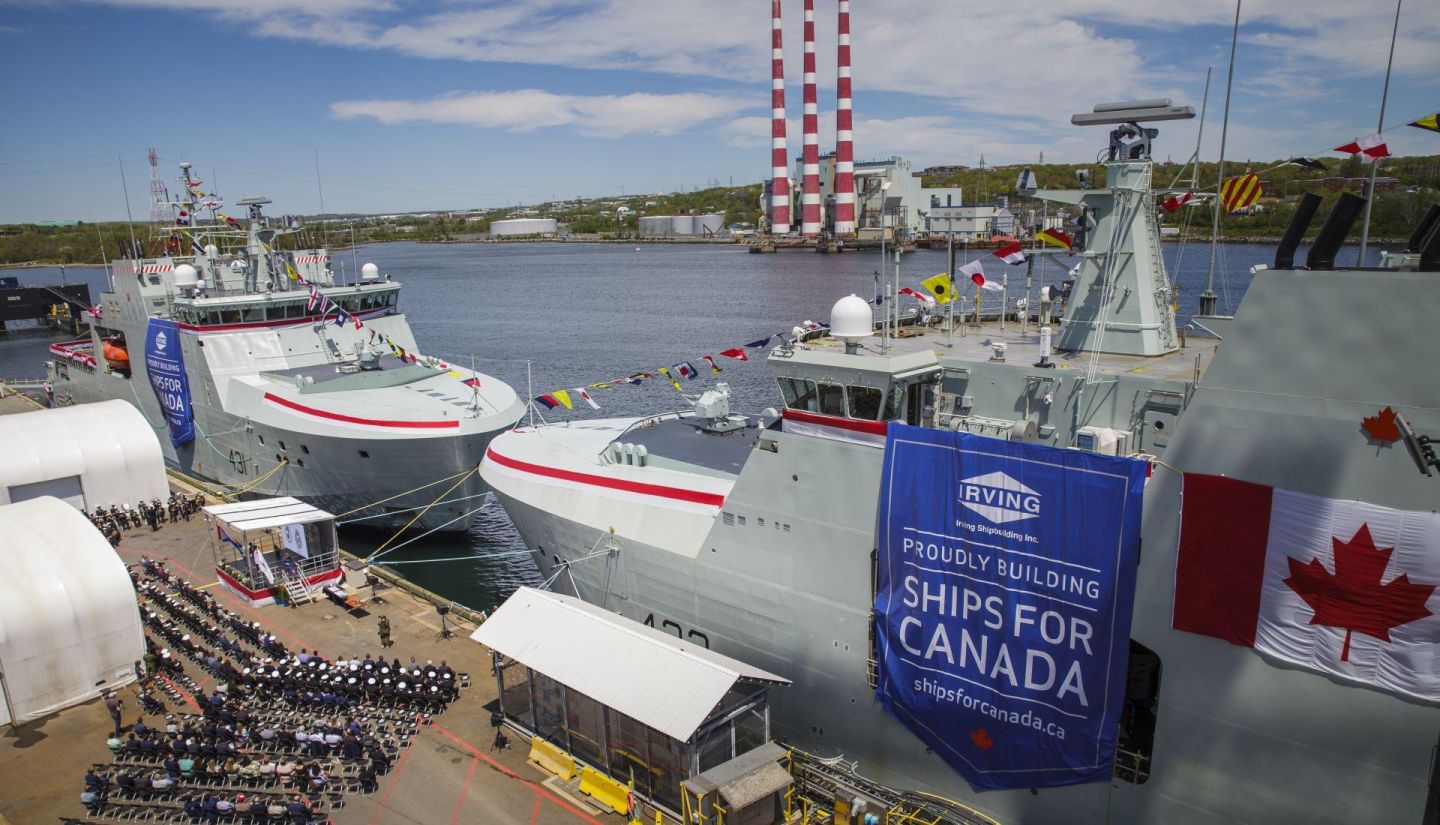 HALIFAX, NS: Today at Halifax Shipyard, shipbuilders, members of the Royal Canadian Navy, the federal and provincial governments as well as the families of two Canadian naval heroes marked another shipbuilding milestone with the official naming of HMCS Margaret Brooke and HMCS Max Bernays.

Both ships are part of the fleet of six (6) Arctic and Offshore Patrol Ships (AOPS) being delivered to the Royal Canadian Navy as part of the National Shipbuilding Strategy. The Arctic and Offshore Patrol Ships are large, ice-capable ships, more than 100 metres long, and designed to conduct a variety of missions in Canada’s waters, including in the Arctic. The vessels will be capable of conducting armed sea-borne surveillance, providing government situational awareness of activities and events in these regions. They will also be able to cooperate with partners in the Canadian Armed Forces and other government departments to assert and enforce Canadian sovereignty, when and where necessary.

The naming of a ship is a steeped in history and naval tradition. Dating back centuries, this ritual is believed to bring good luck and safe travel to the vessel and crew.

Allyson Brooke, the youngest niece of Margaret Brooke is the co-sponsor of HMCS Margaret Brooke along with Margaret Elizabeth Brooke (her older sister). This is the second AOPS and was delivered to the Royal Canadian Navy last summer.

Shannon Bernays is the granddaughter of Max Bernays and the sponsor of HMCS Max Bernays, the third vessel that will be delivered to the Royal Canadian Navy this fall.

AOPV 431 is named after Margaret Martha Brooke who enrolled as a Nursing Sister Dietician on March 9, 1942 at the rank of Sub-Lieutenant (SLt). She was promoted to the rank of Acting Lieutenant on July 1, 1946, then to Lieutenant (Navy) on January 1, 1948, and finally to Lieutenant-Commander on April 1, 1957. She served in the Royal Canadian Navy from 1942 to 1962.

Born in 1915 in Ardath, Sask., Lieutenant-Commander (LCdr) Brooke studied as a dietician before the start of the Second World War and chose it as her occupation upon her enrollment.

On October 14, 1942 during a crossing of the Cabot Strait off the coast of Newfoundland, the ferry SS Caribou was torpedoed by the German submarine U-69. The ferry sank in five minutes. Fighting for her own survival, LCdr Brooke (who was a SLt at the time) did everything humanly possible to save the life of her colleague and friend, Nursing Sister SLt Agnes Wilkie, while both women clung to ropes on a capsized lifeboat. In spite of LCdr Brooke’s heroic efforts to hang on to her with one arm, her friend succumbed to the frigid water. For this selfless act, LCdr Brooke was named a Member of the Order of the British Empire.

Following her return to civilian life, Margaret Brooke completed her university studies in paleontology at the University of Saskatchewan, where she achieved her doctorate. She was the author of numerous research studies on the subject. Margaret Brooke passed away in Victoria on January 9, 2016 at the age of 100.

“The Brooke family is very grateful to the Royal Canadian Navy for honouring our Aunt Margaret for her heroism,” explained Allyson Brooke the sponsor of HMCS Margaret Brooke. “She was a humble woman and did not boast about the recognition she received but I know when she was told about this great honour, she was very happy and proud. It was the perfect gift for her 100th birthday.”

“The ship reflects her in many ways,” Ms. Brooke explained. “She was a fighter, yet a humanitarian so, the multiple purpose capability of this ship to protect Canada when necessary but also be able to be equipped and deliver humanitarian aid when required would particularly please her.”

AOPV 432 is named after Chief Petty Officer (CPO) Max Bernays, a Canadian naval hero who served as the Coxswain of His Majesty’s Canadian Ship (HMCS) Assiniboine during the Second World War’s Battle of the Atlantic.

Max Bernays was born in 1910 in Vancouver, British Columbia. He had served in the Royal Canadian Navy Volunteer Reserve (RCNVR) in 1929 and served with Canadian National Steamships in the 1930s. Bernays was recalled by the Royal Canadian Navy at the outbreak of the Second World War. By March 1942 Bernays had achieved the rank of Acting Chief Petty Officer and was the Coxswain aboard HMCS Assiniboine, a River-class destroyer.

On August 6, 1942, during intense surface gun action against the German submarine U-210, HMCS Assiniboine manoeuvred in and out of a fog attempting to ram and sink the enemy submarine. Both vessels were firing high explosive shells at very close range, resulting in a fire that engulfed the bridge and wheelhouse of Assiniboine. Surrounded by smoke and flames while steering the ship, CPO Bernays ordered two junior sailors to get clear, leaving him alone at the helm and trapped by the blaze. Besieged by flames, he executed all the helm orders as Assiniboine maneuvered for position against the U-boat, and did the work of the two telegraphmen, dispatching over 130 telegraph orders to the engine room. Several bullets and shells penetrated the wheelhouse as the enemy concentrated their machine-gun and cannon fire on the bridge. Eventually Assiniboine rammed and sank U-210 in what was considered to be an extremely hard-fought action, during which the Canadians suffered one fatality and 13 wounded.

CPO Bernays was awarded the distinguished Conspicuous Gallantry Medal (CGM) by the British Admiralty for his valour and dauntless devotion to duty during action. He was one of only two members of the RCN to receive the CGM during the Second World War.

“Max Bernays was a proud Canadian who cared about his crewmates and loved his country,” said Shannon Bernays, the sponsor of HMCS Max Bernays. “The Bernays family is honoured by this recognition. I wish my grandfather Max could have been here. He would have been very modest about any acknowledgement of his true bravery and service. But he would have been delighted to be amongst Navy compatriots and aboard this beautiful, world-class ship. We wish the crew good health and safe travels always.”

“Today in Halifax we officially named two new Arctic and Offshore Patrol Ships, HMCS Margaret Brooke and HMCS Max Bernays - honouring two Canadian naval heroes. I would like to thank Irving Shipyard for their great work on these two ships that will serve in the Canadian Armed Forces for decades to come.” The Honourable Filomena Tassi, Minister of Public Services and Procurement

“Nova Scotia is the best place in the world to build ships because shipbuilding is in our blood. Irving has carried on this legacy and will see that it continues long into the future. These ships were built by Nova Scotians for Canadians. They are an example of the quality Nova Scotians in the skilled trades can achieve.” Premier Tim Houston, Province of Nova Scotia

“The National Shipbuilding Strategy is creating jobs and economic activity across Canada, including locally in Halifax where the number of companies and workers benefitting from this program has increased substantially since 2015. As the next Arctic and Offshore Patrol Ships to be added to the fleet, the official naming of HMCS Margaret Brooke and HMCS Max Bernays is an important milestone in our work to equip the Royal Canadian Navy and Canadian Coast Guard with the ships they need to protect Canadian interests.” Andy Fillmore, Member of Parliament for Halifax and Parliamentary Secretary to the Minister of Innovation, Science and Industry

“This is a proud day for our team of over 2100 shipbuilders. These two ships are visible signs of the success of Canada’s National Shipbuilding Strategy. To date, the combatant fleet work at Irving Shipbuilding has generated over $4.35 billion in investments across Canada. We are also proud to be the largest employer of apprentices in Atlantic Canada as we continue to grow life-changing careers for the next generation. From our team to the crews of these fine ships we wish you fair winds and following seas.” Kevin Mooney, President of Irving Shipbuilding