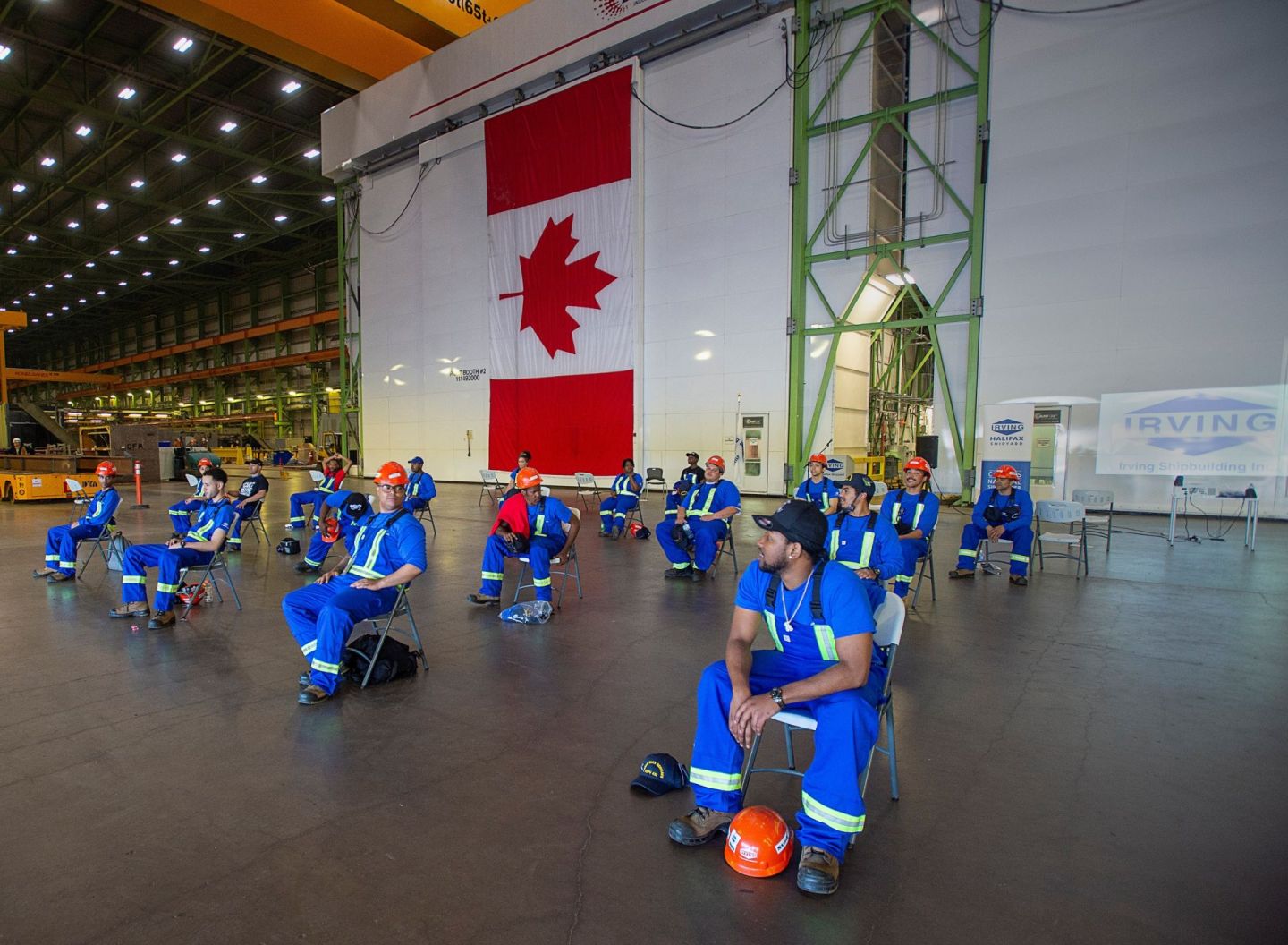 The first-ever Pathways to Shipbuilding Program for African Nova Scotians concluded today at Halifax Shipyard where students had been working on their final practical training in the two-year welding program.

East Preston Empowerment Academy hosted program partners today at the shipyard to acknowledge the success of the program. All 20 students who began the program in 2018 are scheduled to graduate, including 13 with Honours.

The program was disrupted in March due to the current pandemic. Program partners developed a revised plan that saw the students arrive at Halifax Shipyard four weeks ago so they could resume their practical training to obtain their four Flux Core Arc Welding tickets required by the Canadian Welding Bureau (WCB) in order to work in shipbuilding. Irving Shipbuilding also covered the tuition and testing fees for the students.

During the remarks, Irving Shipbuilding President Kevin McCoy informed the students that upon successful conclusion of their program and obtaining the necessary WCB welding tickets and other clearances, the students would be offered positions as welders at Halifax Shipyard.

In her remarks, the Hon. Bernadette Jordan congratulated Irving Shipbuilding on recently being named a winner of a 2019 Employment Equity Achievement Award for Outstanding Commitment to Employment Equity. The award, from Employment and Social development Canada, was in recognition of the Pathways to Shipbuilding Program.

The Hon. Bernadette Jordan, Minister of Fisheries, Oceans and the Canadian Coast Guard - “If we want to achieve a more diverse workforce, one that gives opportunities to racialized and under-represented Canadians, we need to do the work and recruit people like African Canadians, women, Indigenous peoples, and then train and empower them to launch their careers with confidence. With the Pathways to Shipbuilding Program, we know that Irving is committed to that work. Our government is proud to support this program, and to celebrate these young African Nova Scotians who will now launch their careers in a trade that is so central to Canada’s economy and culture.”

Andy Fillmore, Member of Parliament, Halifax - “Organizations big and small have a responsibility to act with intention to give underrepresented groups the access, support, resources, and training they need to succeed. That is exactly the aim of the Pathways program. I look forward to the continued success of this program in the years to come, and offer my sincere congratulations to these new shipbuilders who will help build the next fleet of the Canadian Royal Navy right here in Halifax.”

Darren Fisher, Member of Parliament, Dartmouth-Cole Harbour - “When we promote and value inclusion and diversity, we strengthen workplaces, industries and our country. We believe in Pathways to Shipbuilding and the incredible experience and skills the program provides Nova Scotia’s future shipbuilders.”

Kevin McCoy, President, Irving Shipbuilding Inc. - “We have been tremendously impressed by these students and were pleased to be able to make offers to have them to join our team of world-class shipbuilders here at Halifax Shipyard to build ships for Canada. We believe in the Pathways to Shipbuilding initiative and know that by working with our community partners, we will continue to strengthen our organization by expanding our reach to include all those who are looking for rewarding, long-term shipbuilding careers here at home in Nova Scotia.”

Don Bureaux - “Congratulations to the most recent graduates of the Pathways to Shipbuilding program who persevered through a pandemic to achieve their goals. We are proud to be a partner in this vital program.”