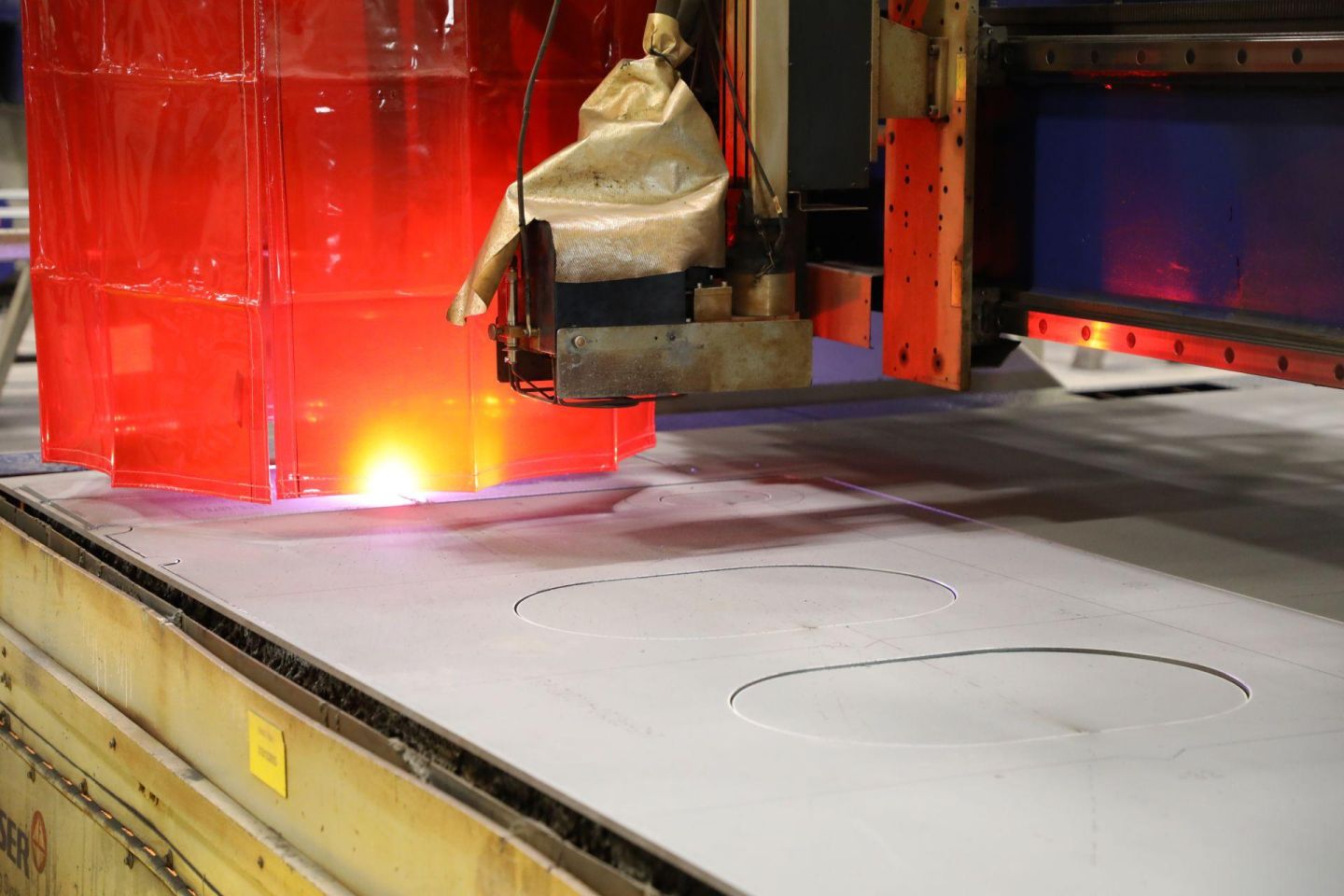 Construction of Canada’s future combat fleet begins at Irving Shipbuilding’s Marine Fabricators facility in Dartmouth, where 32 people are involved in the computerized plasma cutting and delivery of 4,000 tonnes of steel each year in support of the AOPS program. The resulting 70,000 pieces are fabricated in a strategic sequence to meet the production schedule at Irving Shipbuilding’s Halifax Shipyard, the most modern and largest indoor shipbuilding facility in North America.

The steel weighs 3734 kilograms (more than three tonnes) and will be used in a combination of locations on the ship, including the initial pieces that will begin development of the keel. Upon completion, the future HMCS Frédérick Rolette will be 103.6 metres in length, have a 19-metre beam, displace 6,615 tonnes and be comprised of 440,000 parts. Each AOPS vessel has over 300kms of cable and more than 36kms of pipe.

Canada’s second, third and fourth AOPS are currently under construction at Halifax Shipyard. The future HMCS Margaret Brooke recently completed successful Sea Trials and is in the final stages of preparation for delivery to the Royal Canadian Navy. The future HMCS Max Bernays recently moved all Mega Blocks to land level and is undergoing final assembly in preparation for launch later this year. The future HMCS William Hall officially laid the keel in February this year and construction of the bow, mid-ship and stern Mega Blocks is underway. The lead vessel in the class, HMCS Harry DeWolf, was delivered to the Royal Canadian Navy on July 31, 2020.

Born in Quebec City in 1785, Lieutenant Frédérick Rolette was a naval hero of various actions as a member of the Royal Navy during the war of 1812. Upon the outbreak of war, Rolette immediately captured the American vessel Cuyahoga, marking the first action of the War of 1812, and the first of several American vessels he would take during the war. In addition to his prowess on the water, Rolette participated in land battles at the Capture of Detroit, the Battle of Frenchtown, and the skirmish at the Canard River. Rolette returned home to Quebec City following the war, passing away in 1831 at the age of 45.

To date, the combat shipbuilding program at Irving Shipbuilding has delivered over $3.7 billion in investments and spending commitments across Canada and is generating over 8300 jobs (direct and indirect). Halifax Shipyard is continuing to hire – welcoming over 300 new team members since the new year began.

The Honourable Bernadette Jordan, Minister of Fisheries, Oceans and the Canadian Coast Guard

“It’s an important day for shipbuilding in our province as the first piece of steel is being cut to mark the beginning of construction on the fifth Arctic Offshore Patrol Ship – the HMCS Frederick Rolette,” said Premier Iain Rankin. “Congratulations to the Royal Canadian Navy and all of the shipbuilders at the Halifax Shipyard and Marine Fabricators in Dartmouth. The cutting of steel represents an important milestone in our country’s shipbuilding program. It reminds us too of Nova Scotia’s proud history as a shipbuilding province.”

“Congratulations to the shipbuilders at Marine Fabricators in Dartmouth and the Halifax Shipyard. The future HMCS Frédérick Rolette will be the fifth Arctic and Offshore Patrol Ship built in Canada. The National Shipbuilding Strategy is providing good jobs in Nova Scotia while boosting our regional economy. This is a great day for Nova Scotia and the Royal Canadian Navy.”

“There is no doubt that Halifax is the best equipped city, with the best shipyard and best shipbuilders to deliver the next generation of Canadian naval and patrol vessels.”

“Today marks another important milestone in the Arctic and Offshore Patrol Ships (AOPS) program as we cut steel on the fifth ship of the class. I am proud of our 2,100 shipbuilders, who are committed to continuous improvement and providing quality ships to the Royal Canadian Navy. We are really hitting our stride here in Irving and seeing gains in our quality and skills despite the challenging environment caused by the COVID-19 pandemic. Today’s steel cutting is taking place at our Marine Fabricators facility in Dartmouth. It gives me great pleasure to share that our workers at this facility have operated for 6 years running without a lost time safety incident. At Irving Shipbuilding, safety is our number one priority and these fine shipbuilders make all of us proud by looking after each other and achieving a simply remarkable safety accomplishment. We also want to recognize the more than 300 businesses in Nova Scotia and across Canada that are part of this historic program under the National Shipbuilding Strategy, making a positive economic impact from coast-to-coast-to-coast through well-paying jobs and investment in Canadian companies and innovative technology.”

Irving Shipbuilding Inc., Canada’s National Shipbuilder, is the most modern shipbuilder and in-service ship support provider in North America. Headquartered in Halifax, Nova Scotia, our skilled team and innovative facilities provide efficient building, fabrication, conversion and servicing of vessels and offshore platforms. Irving Shipbuilding Inc. is the prime contractor and shipbuilder for the Royal Canadian Navy’s next class of Canadian Surface Combatants (CSC) and Arctic and Offshore Patrol Ships (AOPS) as part of the National Shipbuilding Strategy (NSS). We are proud to continue our long history as a trusted partner in Canadian shipbuilding. Irving Shipbuilding Inc. is a member of the J.D. Irving, Limited group of companies, a diverse family-owned company with operations in Canada and the United States. Learn more at www.ShipsforCanada.ca.